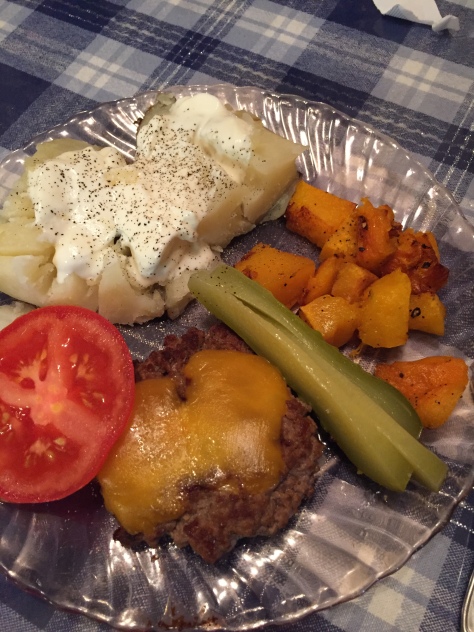 This week, after looking around outside in the covered porch, I found a few items lurking around out there.  I also took a walk out into the muddy, muddy garden and found a few things.  I decided to use those up instead of buying more.  Novel thought:). LOL!

I baked a butternut squash we grew.  It had a few bad spots, but I cut them off, cubed it, and roasted it with olive oil, salt and pepper.  I used home-canned pickles.  I cooked burger from last year’s cow (there’s a bit left, still.) 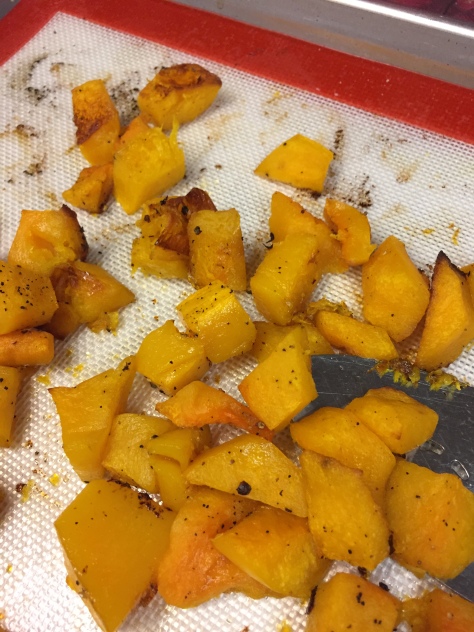 We ate up the rest of the chicken I baked earlier in the week.  Rob made some pizza using some pre-baked bread crusts he found at Grocery Outlet for around $1 for 2 a while back.  He used toppings we had on hand.  I baked one of the gluten-free Costco pizzas I buy frozen.  I added toppings to the cheese they come with.  We cruised along on that for a few days as we made lots.  (Thank goodness I didn’t eat an entire pizza in one day!)

Last weekend, I went out and got a few things, mostly produce.  One thing I bought was a 15 pound bag of potatoes for $2.50.  So, we baked up a bunch of those. We’ve had those a couple of times this week. 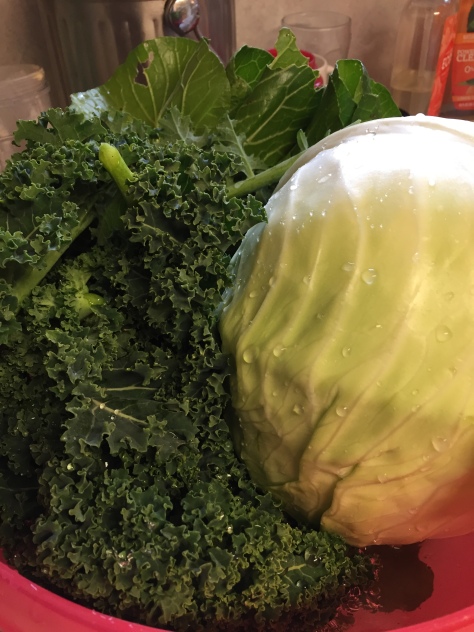 Out in the garden, I found a nice cabbage, some kale and a bunch of boc choi.  The boc choi was a surprise, as it was hiding behind some other things and I didn’t see it until I got out there!  I finished up a head of cabbage I had previously picked, and was delighted to see that this one was in excellent condition.  On the covered porch, I found a small handful of potatoes, a couple of small squash and a few onions.  I should tidy the porch more often:). 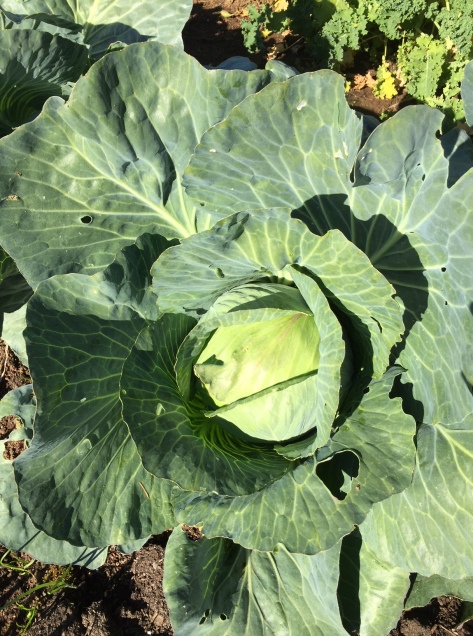 That cabbage grew a lot since this picture was taken at the end of last summer!

I also cleaned out the small freezer above the fridge because I had the things all slide out and land on my feet one too many times.  I found a couple of mystery baggies of various meats and some other items.

So, I made a soup from pork(?), the potatoes, an onion, a bunch of cabbage, carrots, frozen beans, and some tomatoes.  I also dumped in some pinto beans that were also lurking in that freezer.

I cut up a bunch of cabbage and put it in a Ziplock in the fridge for coleslaw over the next couple of days.

I made smoothies from fruit I froze last summer.

Rob BBQ-D some steak from our new beef we recently received to see how it was.  It was amazing!  We had baked potatoes and canned green beans with it. 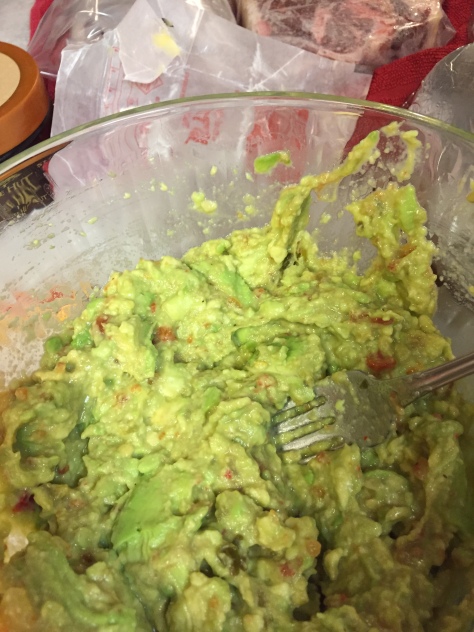 I also used up every avocado I had, which Rob got at Grocery Outlet for a very low price last week.  I made guacamole.  We had enough for 2 days of that, too.

The peaches and applesauce have really come in handy this week, since Lovana had 2 wisdom teeth taken out on Monday.  She had a really hard time with one of them.  So, she’s been eating lots and lots of ice cream, peaches, applesauce and mashed potatoes.  When I took her back to the dentist on Thursday, I got her a milkshake at Burgerville.  She is finally feeling quite a bit better today, and went to work for the first time since last weekend.  Good thing.  The ice cream is about gone:).  The triple chocolate, the chocolate chip mint, and the vanilla.  Trust me, she had a lot of willing helpers to eat ice cream.  So, you could say ice cream was one of our food groups this week.

I decided to skip my usual weekend shopping this week.  Instead, I want to use what’s in the fridge, home-canned and frozen items, cabbage, boc choi, kale and pantry items.  If it’s going to fall out of the freezer onto my feet, that’s it.  It’s going on the plate!  Later in the week, if I need milk or something, I’ll worry about it then.  I’m right on track for a moderate-spend month, and I’ll just leave this week’s money in it’s envelope in case I run out of things later this week.